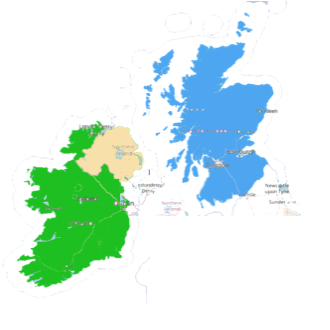 Last month, our Greater Glasgow group asked Dr Paul Gillespie to join them. He talked about Scotland and Ireland, comparing and contrasting our two nations : constitutionally, economically, politically and historically. That’s a pretty extensive remit for an hour or so’s meeting but they made a good start!

Paul Gillespie is a former foreign affairs editor for the Irish Times. Now he focuses on research as a political analyst working in the field of Irish, Scottish and UK issues. For example:

Last month Yes Kirkintilloch, Lenzie and the Villages brought together a panel of experts to talk about pensions in an independent Scotland. This is an important topic given that so many pension-age Scots are not yet convinced about independence.

By coincidence, in the same week as we have been promoting our new leaflet on Pensions, a motion was passed at the SNP Conference calling for an increase of State Pension in an Independent Scotland to the same level as the OECD average and supporting the commissioning of a Scottish State Pension Plan. The data referred to in the motion echoes much of the information on our leaflet.

You can download a PDF file with all our data on State Pensions and how ours compares to other developed countries: Pension Data

Or for a quick idea of how another small country much the same size as Scotland is doing with their State Pension, this will give you the general idea:

Now I bet most of us would be pleased if our State Pension was the same as Ireland’s. But Ireland’s State pension itself is still below the average for EU countries. Here’s how UK, Ireland compares with average State Pensions:

Is this going to be possible in a newly independent Scotland? Well, certainly not immediately, but at least we’d have a Parliament at Holyrood who’d likely be trying to get us up to that level. SNP would be trying to do that and it’s not a stretch to surmise that the Scottish Greens, Labour and maybe LibDems would also support it. And that would be much better than what we have at the moment : State Pensions are not devolved to Holyrood but are instead in the hands of Westminster and whoever the English electorate votes into power. A Scottish State Pension Plan is the first step. Oh, wait, the first step is an independent Scotland.

Reproduced with permission from @WeegieFifer

There have been several news items about UK State Pension this week. The House of Commons library produced a briefing about country-by-country comparisons of state pensions back in May. Don’t remember it being much in the news in May but the National have reported on it this week.

Different countries have different systems for their state pension both in terms of how they collect pension contributions and how people are eligible for them. The Commons Briefing reckons that the two countries most similar to UK’s system and therefore the best comparisons are Eire and the Netherlands. Here’s what the weekly pensions on UK, Eire and Netherlands look like, using today’s £/€ exchange rate of 0.91. There are two UK levels of state pensions depending on when you reached pension age before or after 6 April 2016.

The UK State Pension Age (SPA) is due to rise to 66 next year. But reports appeared in the press this week about a proposal to raise the SPA to 75. (Guardian, Daily Mail ) 75? Can this really be true? It is true that the conservative think-tank Centre for Social Justice, which first proposed Universal Credit and is chaired by Ian Duncan Smith MP, have published a report in which they propose raising the SPA to 70 by 2028 and to 75 by 2038. Here’s their recommendation:

END_OF_DOCUMENT_TOKEN_TO_BE_REPLACED

We came across this video on Facebook and contacted the person who created it. He say’s he’s happy for it to be shared anywhere it might do some good.