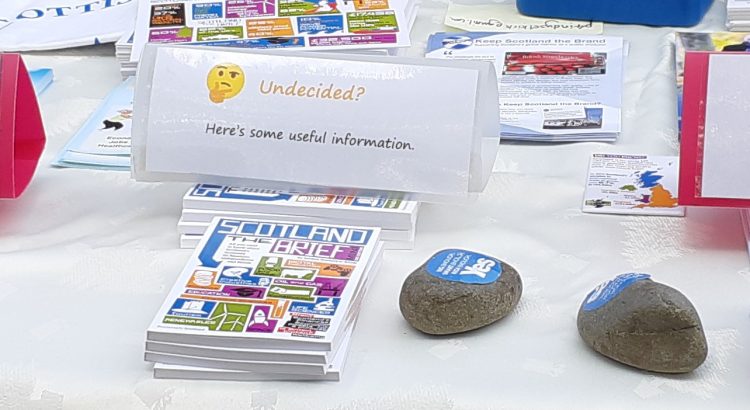 Here’s what been going on….

The stall was set out on Saturday and had a visit from Gordon McIntrye-Kemp, the instigator of Believe in Scotland. That’s him on the right. Other folk were out leafletting in the nearby streets.

Daniel commented: We were in Bruntsfield Place, down from Holy Corner. It was an interesting stall day. A lot of negative comment from very obvious Unionists. Politely refuted and sent on their ways. Almost exhausted our 400 copies of the top notch BusinessforScotland 30 pager supplement. Good effort by all involved.

Our Ayr group were also back on the streets for the Day of Action. The first time they’ve campaigned out and about since the lockdown.

Next up is our Selkirk & District Group. Again out with their stall for the Believe in Scotland Day of Action. We really like their stall signs : Yes Already? Undecided? Definitely No? whichever anyone was, the Scotland the Brief booklet was there to take away.

From Jane: following the conversations we often have at our stalls with younger Yessers, one of our group has set up a Yes Selkirk Facebook group. We hope this will encourage sharing ideas and activities across the generations.

The folk in Glasgow have been back on the streets campaigning for some months now. On Saturday there were two stalls, one out in Milngavie and one in Argyl Street. It took some perseverance to get to their spot near Miller Street – they had to find a way in avoiding the roads blocked off for Orange Lodge Marches. But once there, they had a good time.

Mary says: On Saturday 18th, with most of the city centre closed off for Orange Walks, it took 45 minutes to drive the 10 minute journey from Dennistoun to Argyle Street but we made it in the end. Greater Glasgow Pensioners for Indy had a great Day of Action with stalls both in Argyle Street and in Milngavie (thanks to Anna Gillies!) Great chat, generous donations and a new wee dug!

And some news and changes about the Glasgow Group’s Tuesday stall: The Tuesday mini-stall at Glasgow Green with banners from the National Banner Library is moving to the same Argyle Street site as on a Thursday and will be the full-on stall with the gazebo and all.  That way we hope to have more footfall amongst the passers-by. It will also be handier for volunteers coming in from the West End.  The time remains the same: Tuesdays from 2pm-4pm.

If you’re free on Thursdays, you can find the stall from 12-2pm at Miller St / Argyl St corner. The Milngavie stall is in the centre of the town every other Friday.

All help is gladly accepted! Just email info@pensionersforindependence.scot, tell us where you live and we’ll put you in touch with our local stall team. And if there’s not a local team, we’ll have a chat with you to see if we can help you start one. 😀