Yesterday saw the first of the AUOB marches wend its way through Glasgow. It definitely wasn’t the right time to try exiting the M8 at Charing Cross! Police reckon 35,000 made it Glasgow Green but unofficial tallies put it at nearer 80,000. Either way it was a lot of independence supporters.

Here’s how Mary McCabe, one of our Glasgow P4Indy members and co-convenor of the Nationial P4Indy Group , describes it:

Yesterday was a great success for the pro-Indy movementl. Depending on whom you believe, numbers ranged from 150,000 on the total march to 35,000 actually making it all the way to Glasgow Green. At the Green, there were lots of stalls including our Pensioners for Indy double stall, lots of speeches and live music – with an efficient sound system! Yet at the end the park was so pristine clean that the organisers proudly printed a picture of it on FB.

Our new unicorn Greater Glasgow Pensioners banner shimmered beautifully above all the flags made a great show and was photographed and commented on several times. We didn’t get to all march together as planned; those who arrived early at the meeting point at the Suffragette Tree were moved on to different spots by stewards so that when I arrived with the banner there were only two – Jeannie Campbell and Brian Watson – left. As the march advanced up Kelvin Way the three of us slipped into a natural space in the parade – we genuinely didn’t realise this counted as queue-jumping! Meanwhile the large Edinburgh Pensioners for Indy contingent had to wait for over an hour on a hill in Kelvingrove Park before being allocated a slot and given the go-ahead. Still, and we all got to Glasgow Green in the end.

We had a double stall using both new gazebos. There were half a dozen of us serving and we were all kept busy with queues the whole time. The food and drink flew off the shelves. All 20 of the T-shirts were sold and there’s a waiting list of folk who were too late to get one (I’ll be ordering more this week). Virtually all of Sheena’s jewellery sold too. We were kept busy till after 6.30. The takings haven’t been counted yet but they must amount to several hundred.

Want a T-shirt? Send us a message via the Contact Form from the top of the page and we’ll send you details of how to get one.

The remaining All Under One Banner marches for 2019 are:

It would be great to have big turnouts of P4Indy. I will be bringing the banner to every rally and several Penioners have said they’re planning to go. If the Waverley is repaired by the end of July it’s a lovely sail down to Campbeltown. The turnout at the smaller towns is likely to be 10,000 to 20,000 and at Edinburgh at least 150,000.  Everyone smiling and singing with the crowds on the pavements waving and smiling back at us. At the end there’s music, speeches and stuff to eat and buy in a park. A great family day out.

The serious purpose is even more important: when people witness thousands of friendly cheerful folk, some from far afield, demonstrating for independence down their own high streets it gets harder for Unionists and their friends in the media to claim “There’s no appetite for independence. Nobody wants another referendum. Everybody’s bored with politics. Referendums are ugly and divisive.” If anybody feels like going further afield The Netherlands for Scottish Independence rally is on Saturday May 25th at the Hague.  More details here:
Netherlands Scottish Independence Rally. I attended the previous two years and will be going again this year wearing the new unicorn T-shirt and singing our song on the platform. Usually around 200 turn up and there are good speeches and music. No requirement to speak Dutch!

Some more photos, mainly taken by members of our Glasgow group. 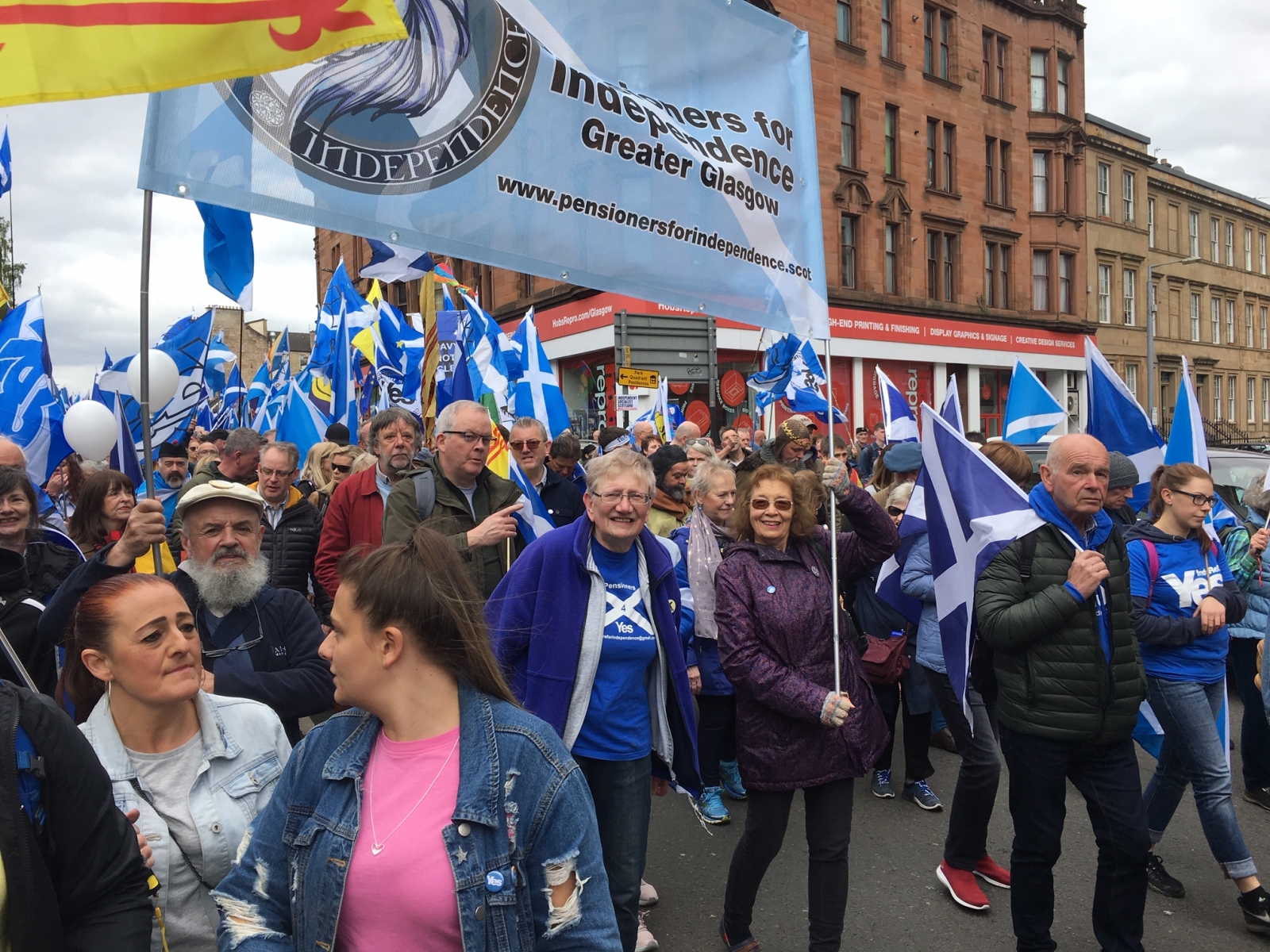 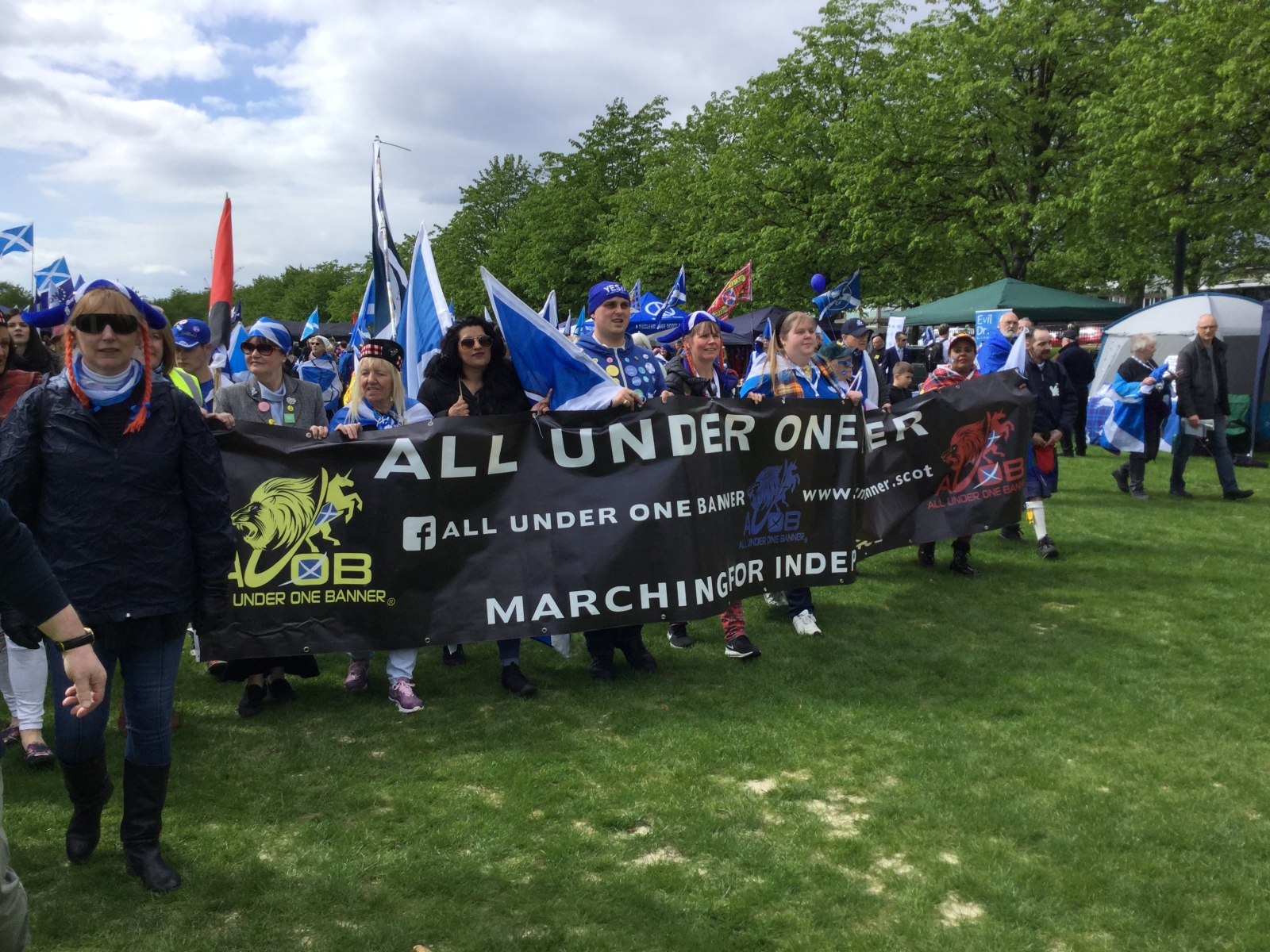 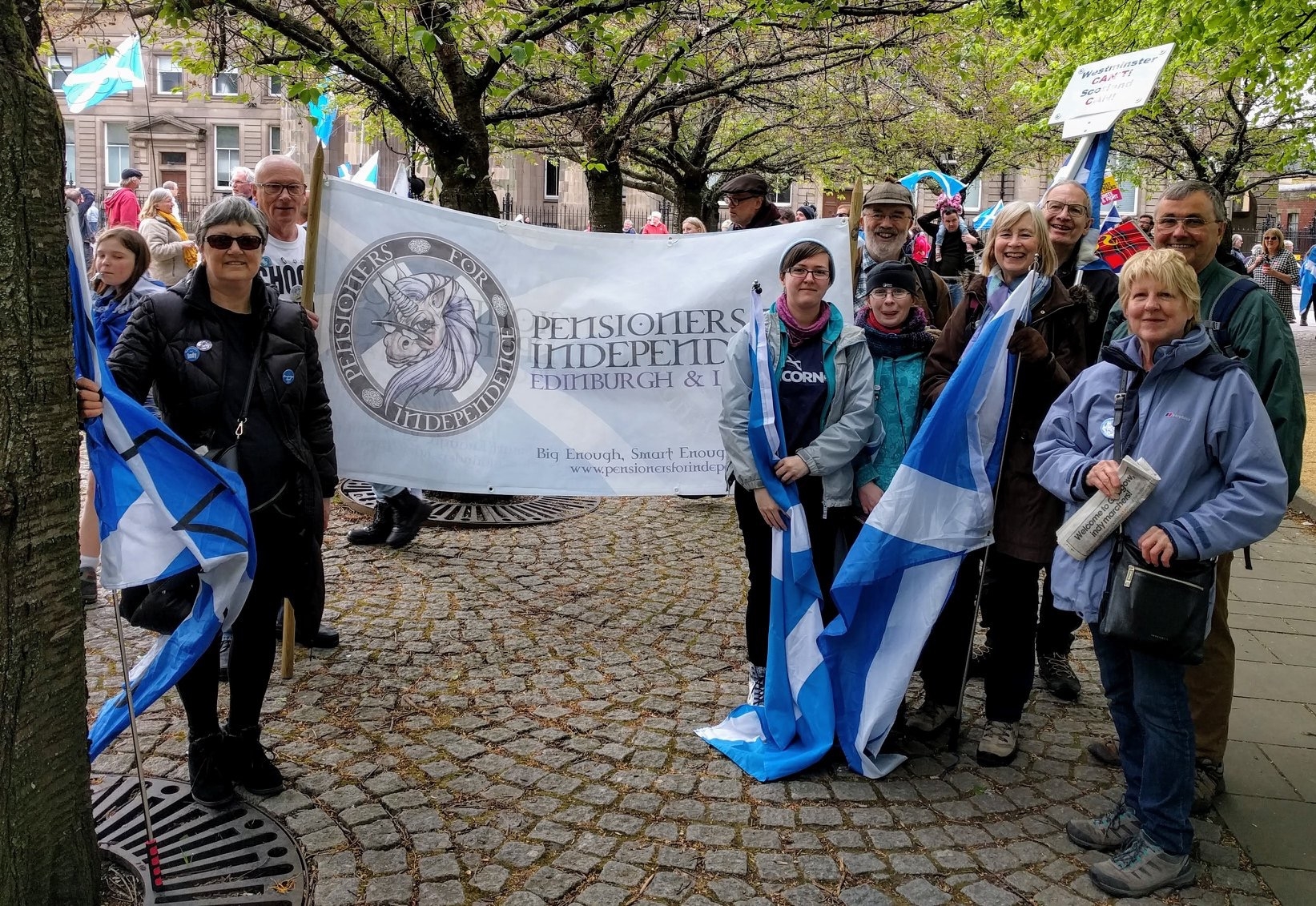 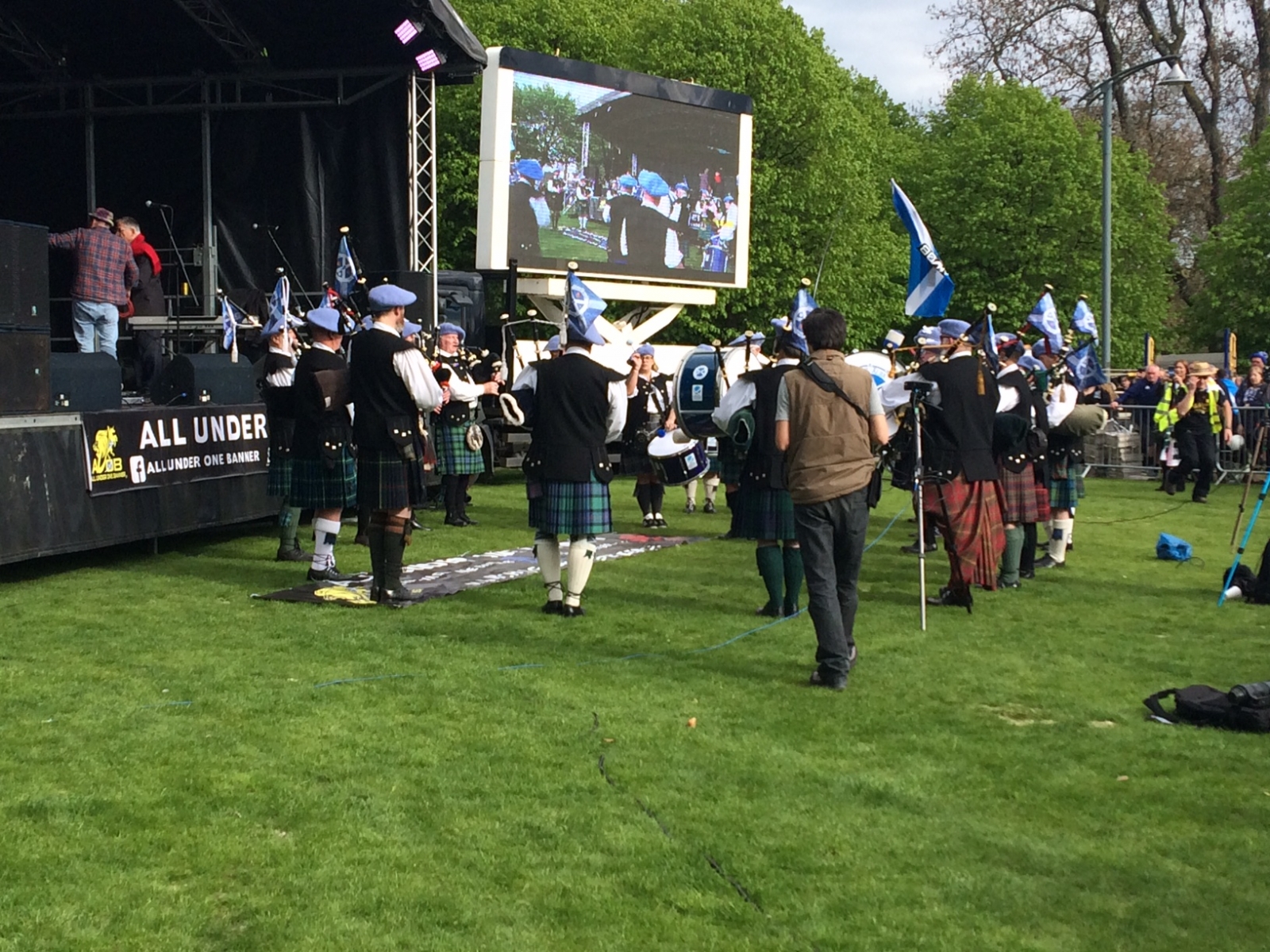 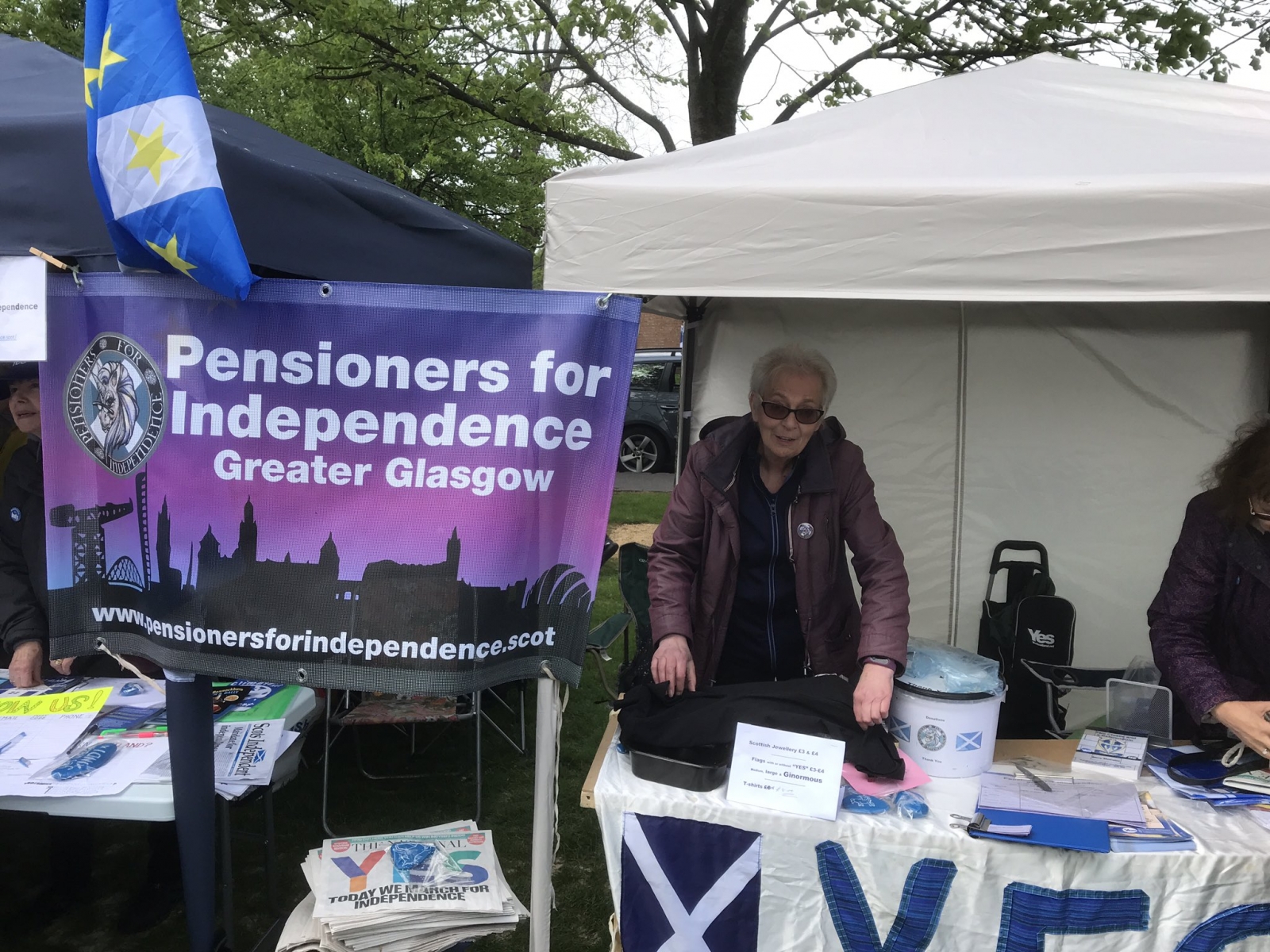 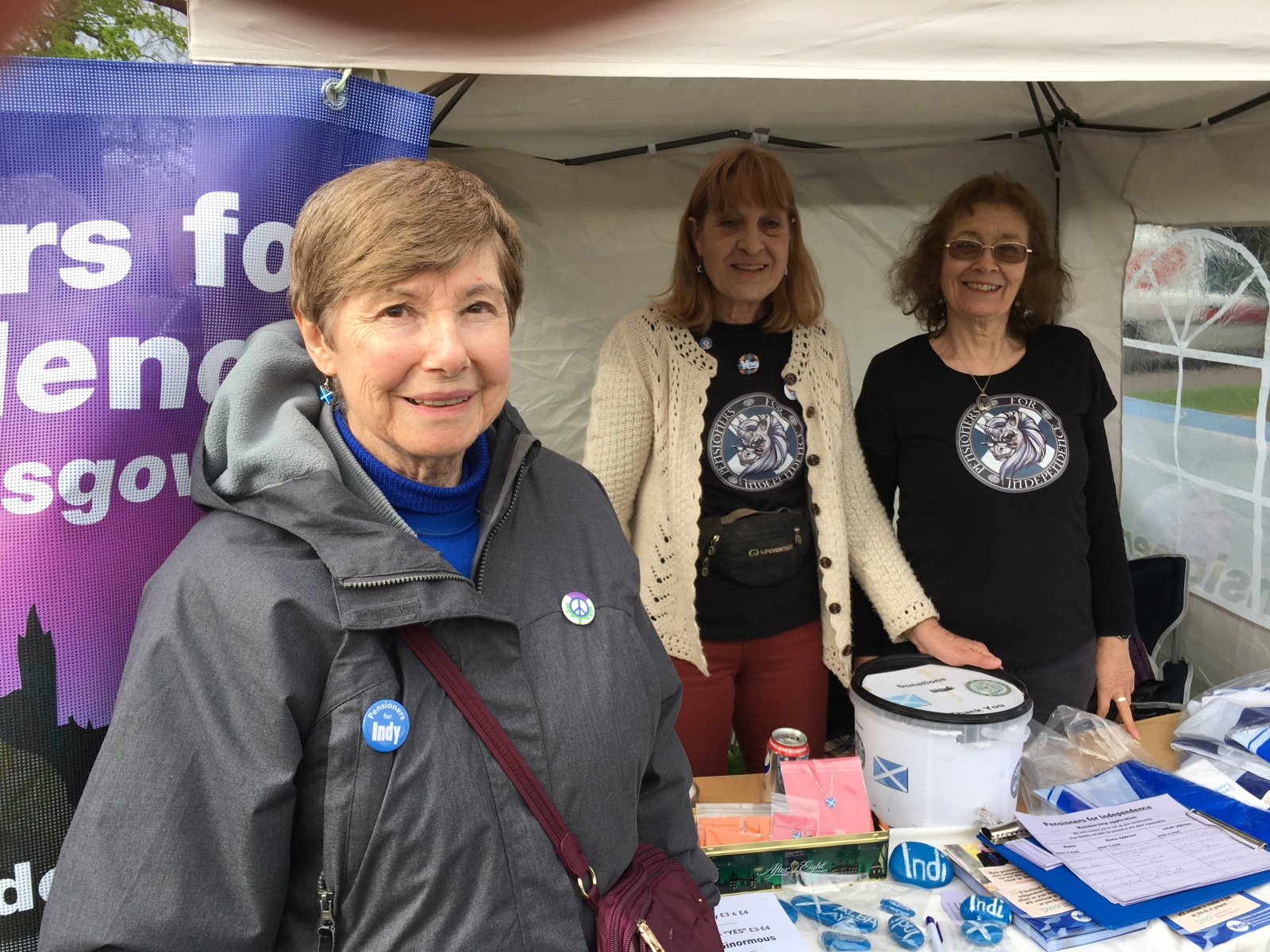 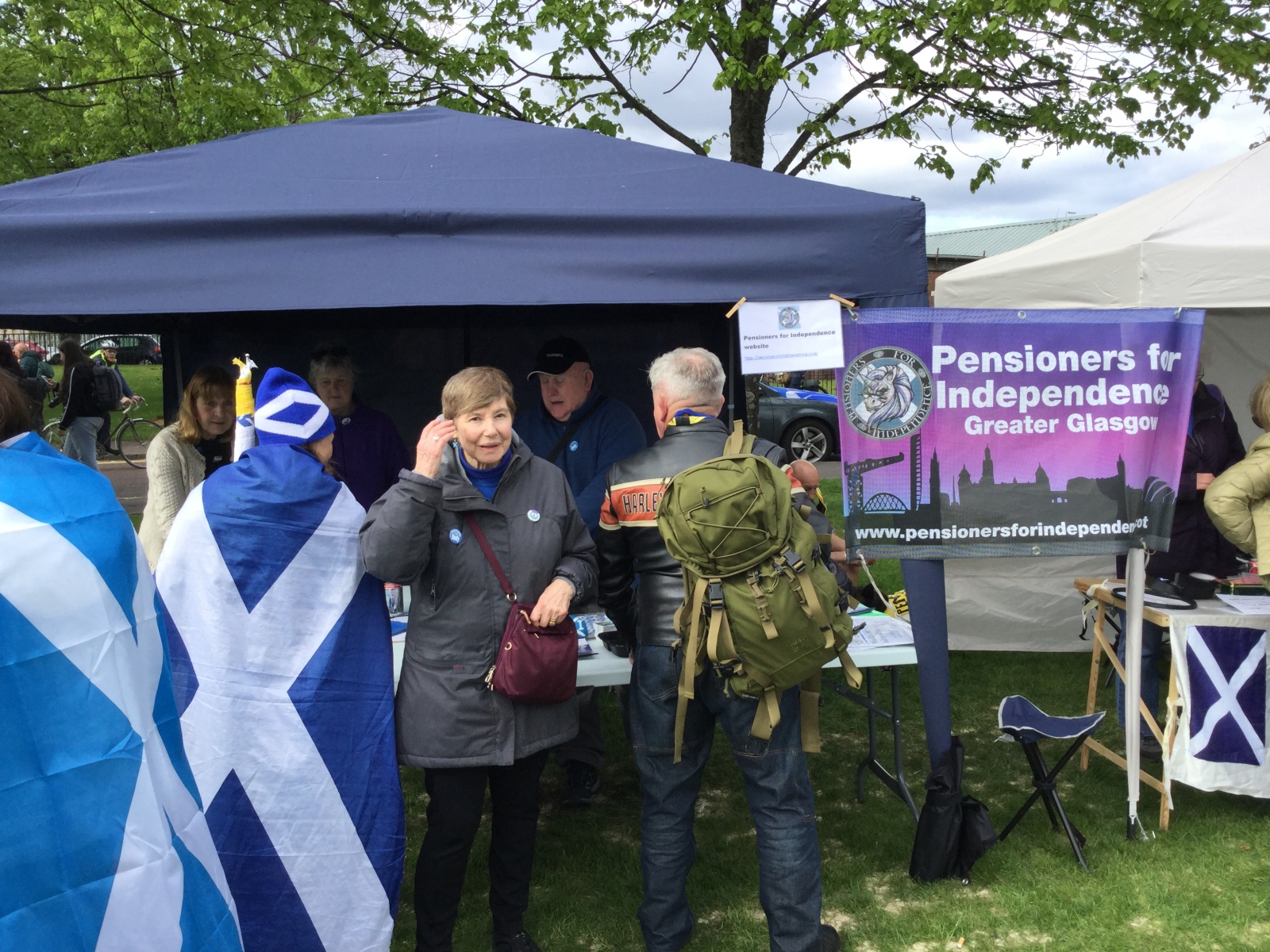 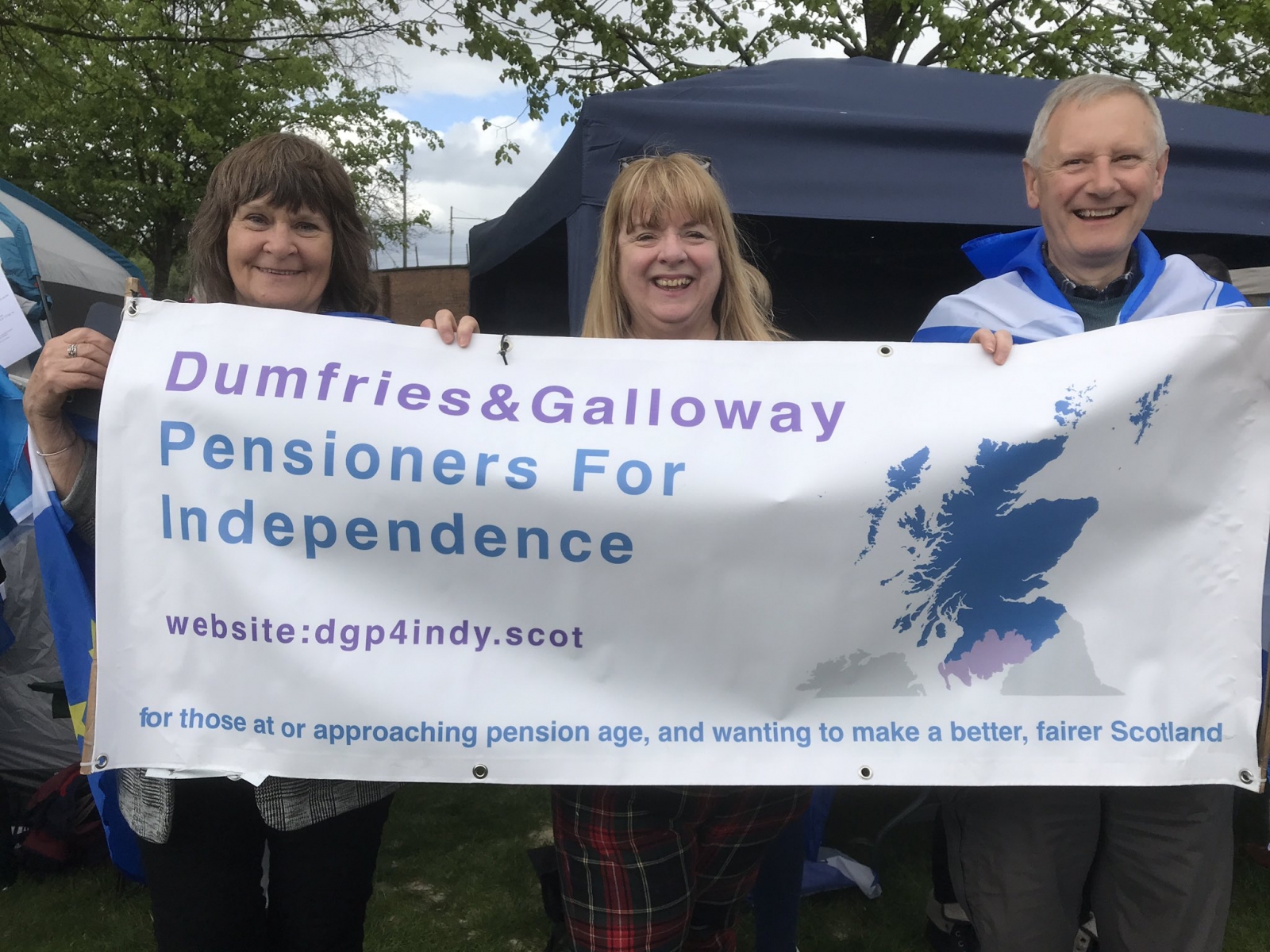 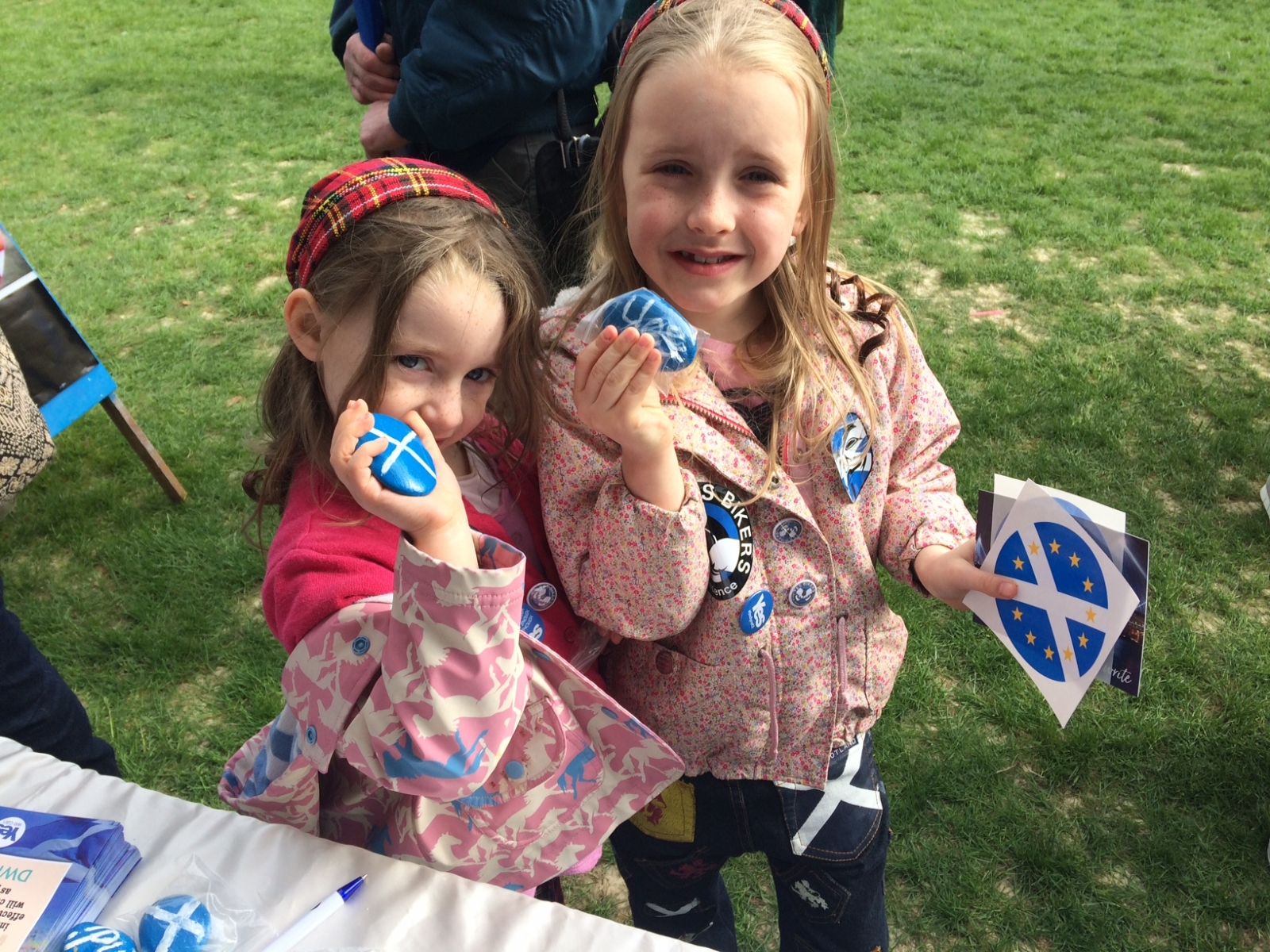 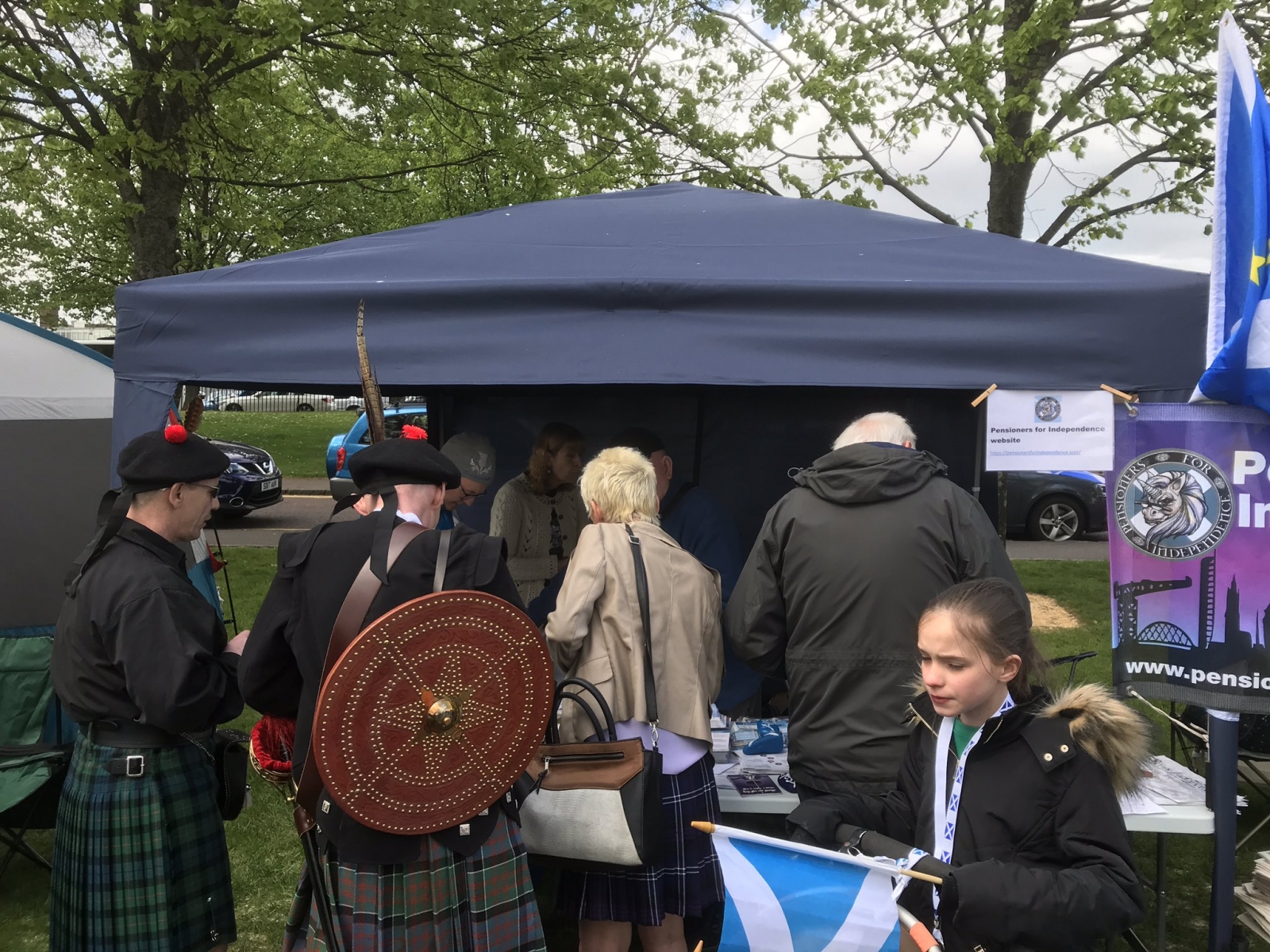 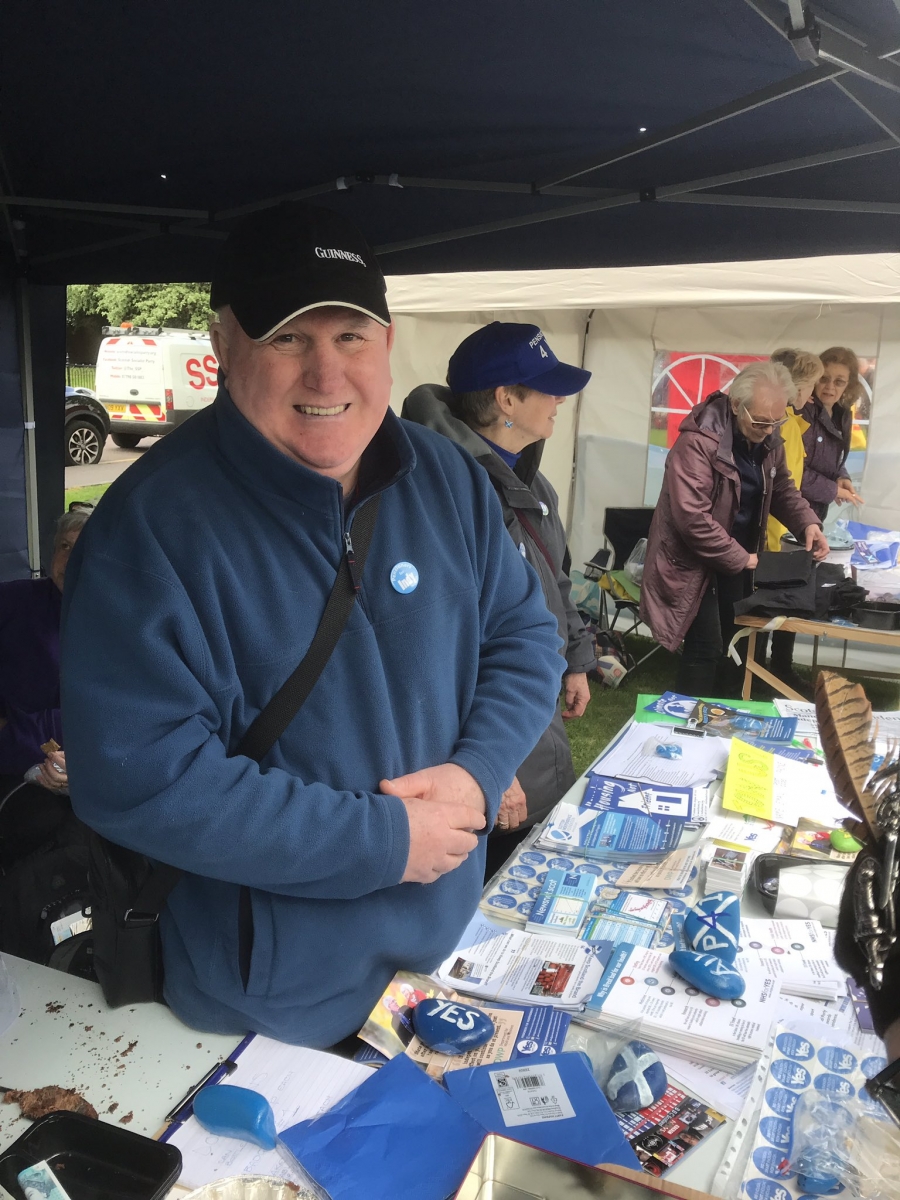 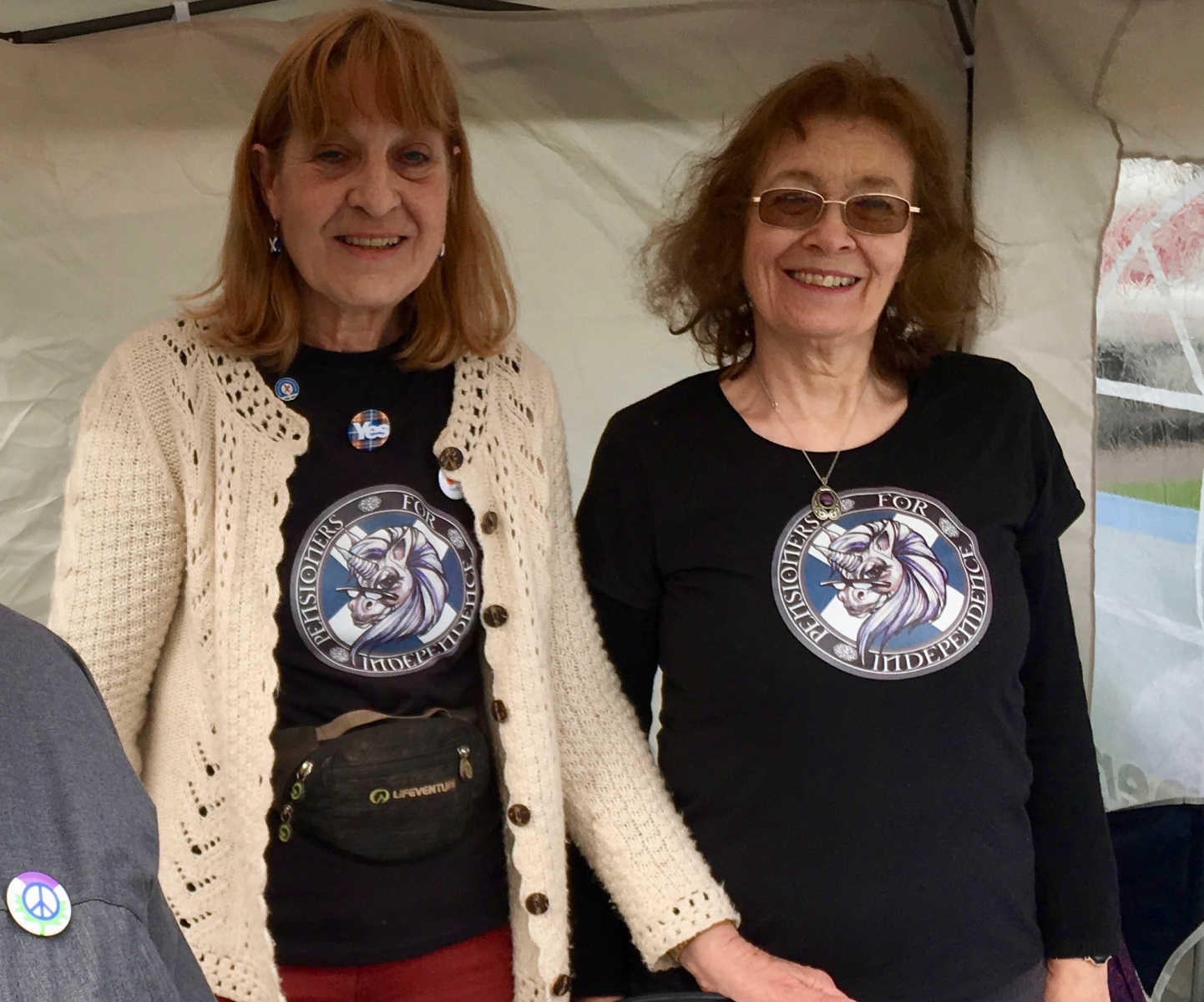